The Lisbon City Council is expanding the bike lane network to face the COVID-19 challenge.

Biciway has a new distributor in Israel

The Lisbon City Council is expanding the bike lane network to face the COVID-19 challenge.

The Lisbon City Council is carrying out a bi-directional ‘pop up’ cycle lane at Alameda dos Oceanos norte (Parish of Parque das Nações), which will be integrated into the cycling network of the city of Lisbon. Pop-up bike lanes are bike lanes that emerge in response to the COVID-19 pandemic, creating, in an expeditious manner, a structuring cycling network that covers central circulation axes and linking the main centers of work, study and residence.

The intervention, under the responsibility of EMEL (Lisbon Municipal Mobility and Parking Company), with an expected duration of 6 weeks, will allow a continuous cycle connection between the south and north of the parish of Parque das Nações and it creates a new intercity connection with the municipality of Loures. It will be part of the riverside structuring axis, which connects Sacavém to Algés in a continuous way.

Alameda dos Oceanos (north) despite its local character, is often used as an alternative crossing route to Avenida Dom João II by those who enter Lisbon by IC2 towards the center, which causes congestion that prevents the normal exit of neighborhood residents. On the other hand, the existing road profile, with two wide lanes in each direction, increases excessive speeds, which greatly contributes to the existence of road accidents on that axis.

The implementation of the bidirectional cycle path will be achieved through the conversion of a road, next to the central separator. It will take a northbound route between the Rotunda dos Vice-Reis and the Rotunda das Oliveiras and towards the south between the Rotunda das Oliveiras and Rotunda da República da Colombia. In this way, it will be possible to reduce the traffic crossing the interior of the parish, at the entrance to Lisbon from the IC2, as well as to contribute to a reduction in the speed of circulation by narrowing the channel.

As proposed by the Parish Council of Parque das Nações, local accessibility in the parish will be improved with a change to Alameda dos Oceanos, between the Rotunda dos Vice-Reis and the Rotunda República da Argentina, allowing the continuity of the route, maintaining the possibility of cut off of crossing traffic on this section at the weekend, in order to provide greater fluidity of internal mobility in the parish.

The new ‘pop up’ cycle lane will thus give Alameda dos Oceanos more security for all road users, pedestrians, cyclists, and motorists, by redistributing the available space. It will also facilitate the accessibility of the residents of the northern part of the parish to heavy public transport, namely the metro and train stations. It will also connect several of the existing educational establishments in the Parish. 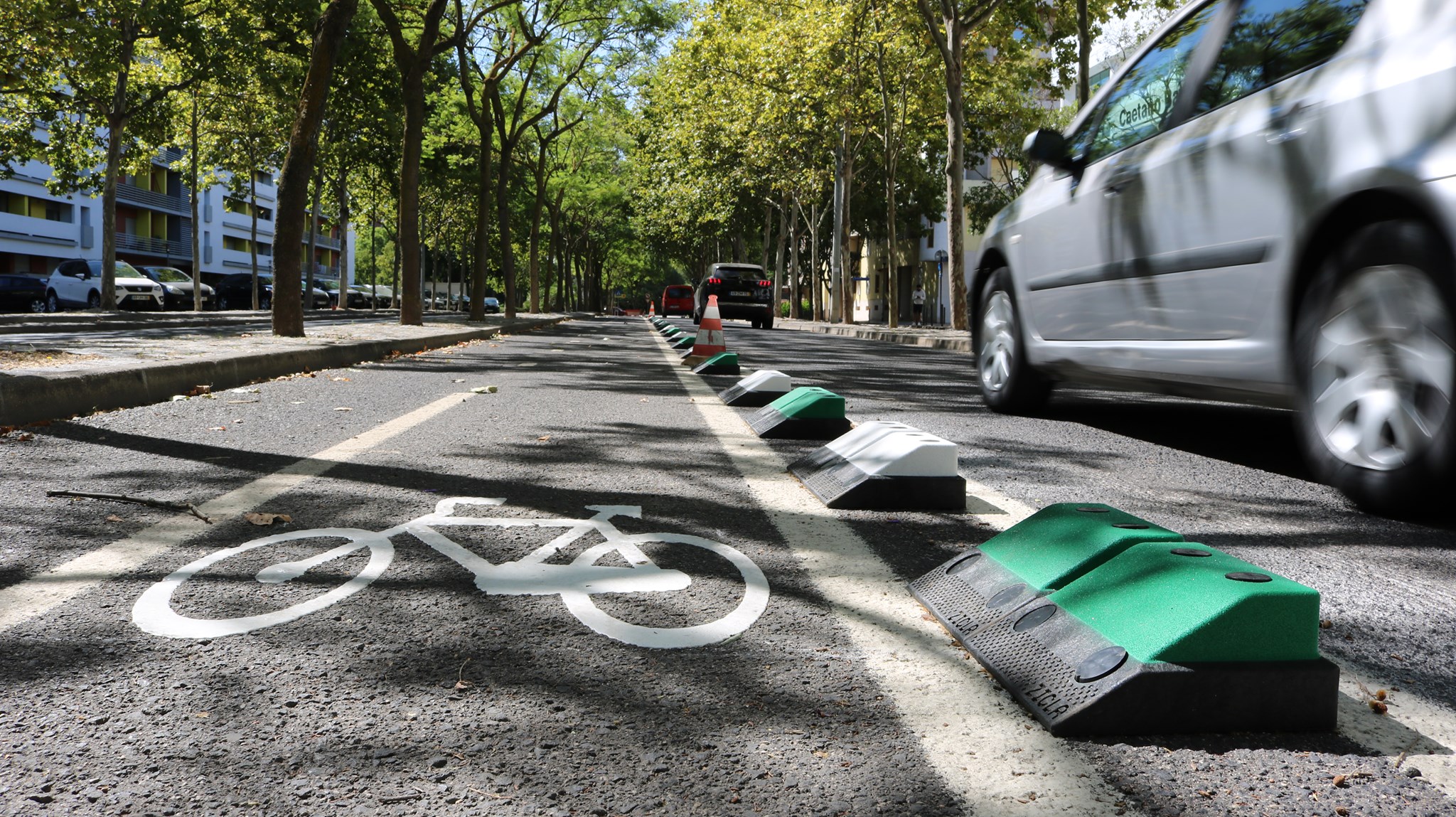 The Zipper ® A | Zero modules painted in green and white segregate the new cycle lane and protects cyclers from the motor vehicles. 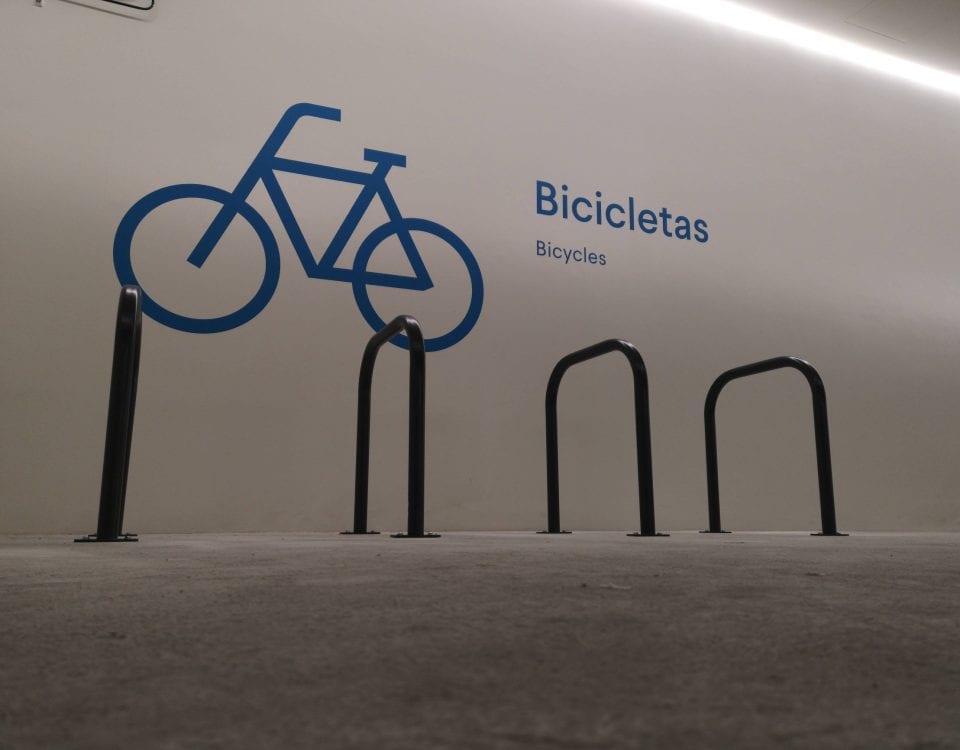 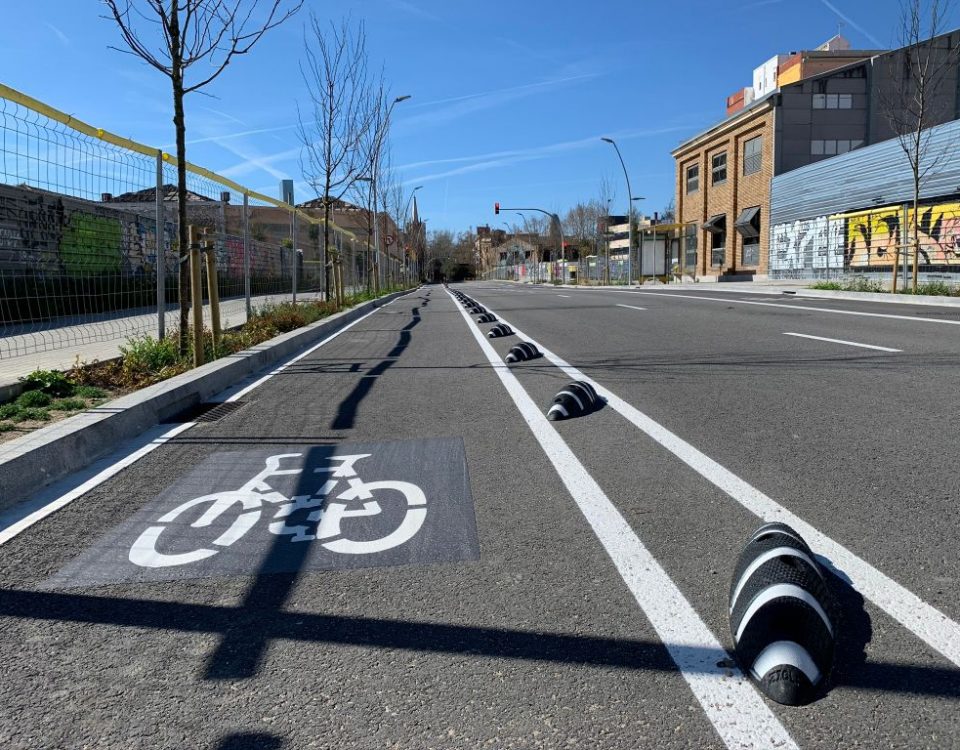